French drains are by far the most misunderstood type of drainage solution that we install at Petty’s Irrigation and Landscape. Likewise, the term “French drain” is frequently misused to describe a surface drain or catch basin. With that said, I am astonished that in all of my years working in the landscape industry, not a single person has ever asked me why French drains are called French drains in the first place. I can’t be the only person to wonder where the term came from, so I decided to utilize Google for what it was intended. Per wikipedia, French drains were…

…described and popularised by Henry Flagg French (1813–1885) of Concord, Massachusetts, a lawyer and Assistant US Treasury Secretary, in his 1859 book Farm Drainage. French’s own drains were made of sections of ordinary roofing tile laid with a 1⁄8 in (0.32 cm) gap left in between the sections to admit water.

The four basic principles that define a French drain are critical and allow the drainage system to be effective or not (if applied or installed improperly). Each of the four principles seem rather basic, but I am routinely reminded how often one or several of the principles gets overlooked or ignored. So, let’s look at each principle in greater detail:

Principle – French drains work by utilizing general hydraulics and the effect of gravity on water. Water moves naturally from areas of higher concentration to areas of lower concentration so highly saturated soils will drain in to the open void spaces of the gravel in a French drain. Likewise, water will always take the path of least resistance.

Common Problem – French drains are often utilized as a solution for drainage problems next to foundations. Not digging the trench deep enough limits the water holding capacity of the drain and often results in poor results. This issue gets exacerbated when dealing with basements or split-level houses where a living space or garage is located below the soil level. In those cases, the French drain trench must be dug below the lowest finished floor level. Most split-level houses are built on sloping hillsides, so it’s simple to achieve enough elevation drop to allow the French drain to outlet naturally. Otherwise, the French drain must be connected to a sump pump system to be pumped to the surface.

Principle – French drains work incredibly well as long as the void spaces or holes in the pipe are not clogged with silt. Many French drains achieve silt filtration by having a gradation of gravel (largest gravel next to the pipe and smaller gravel surrounding the larger gravel). Fortunately, technology has allowed for the development of geotextile fabrics that act like coffee filters surrounding the French drain so the water passes through the fabric easily while the soil particles are filtered out. 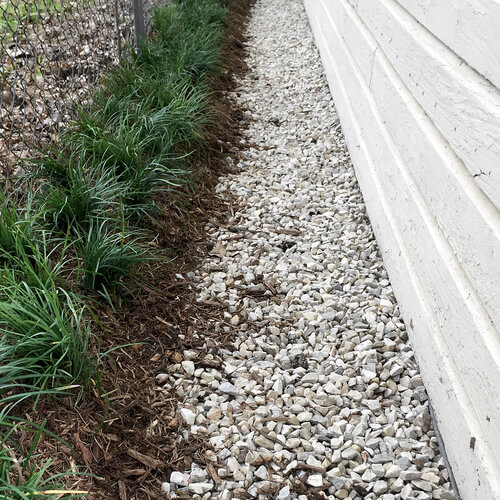 Principle – French drains can function without a pipe (many of the first French drains were installed without pipe) and I have one such system installed at my own house. However, French drains have become a very popular drainage solution because pipes have been developed that allow for very efficient water collection and transport. The two most popular French drain types are PVC pipe (white or green pipe with holes) and corrugated HDPE pipe (black corrugated pipe with holes or slits). There are even pre-fabricated French drain systems that contain a slotted pipe surrounded by geosynthetic aggregate and geotextile mesh sock.

Common Problem – Allowing gravity to carry the water through the pipe is the genius of French drain, but unfortunately it is also the most common downfall. I too often observe French drains that are installed with zero or even negative slope (positive slope refers to a slope that runs away from a structure) and thus negating the effectiveness of the French drain system. Installing French drains with at least a 1% slope greatly improves the functionality and life of the system.

Principle – Related to the common problem of French drain pipes, the outlet of a French drain system must be the lowest point in the system. Ideally, the lowest point is an open-air outlet where the water can continue to flow on the surface outside of the pipe. However, French drains often get installed where an open-air outlet is not feasible. In such cases, the outlet will be in to a sump pump basin where the water can be pumped elsewhere (I will cover sump pump systems in a future blog post).

Common Problem – Many construction sites (commercial and residential) are relatively flat in Texas, so achieving an outlet that is absolutely the lowest point in a French drain system is not always possible. French drain outlets are often found in common drainage corridors (street curbs/gutters, drainage swales/ditches, creeks, etc.). Common drainage corridors are often full or flooded during heavy rainfall events, so the French drain outlet gets backed up, or in worst-case scenarios, allows drainage outside of the property to enter the French drain system and cause further problems. 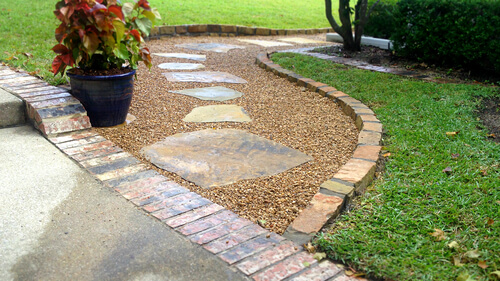 Catch basins do a fine job of collecting surface run-off during rain events, but surface drains offer no solution for already saturated soils. French drains can collect water from saturated soils and transport the excess water away. 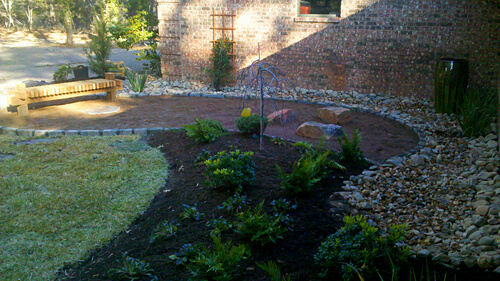 French drains are an excellent solution for collecting water around foundation areas. Petty’s generally top-dresses such French drains with decorative river rock to improve the appearance and allow for better functionality to capture surface and sub-surface water. 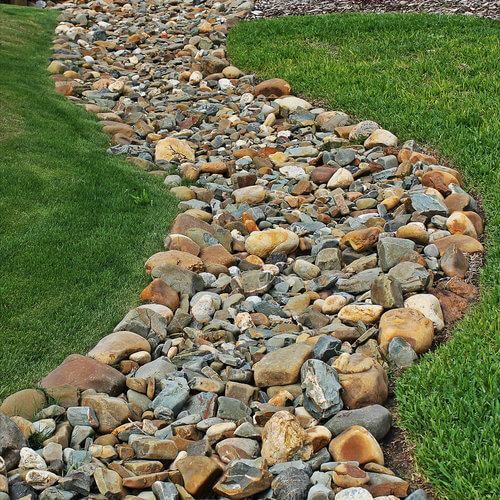 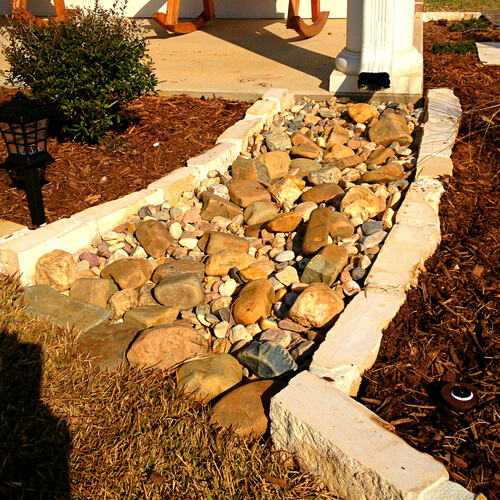 Besides collecting water, French drains can be utilized to distribute water for percolation in to the soil. This particular application may be selected for a number of different reasons (reduce run-off/erosion, no viable outlet, etc.) and it works in the same manner as something else you are probably familiar with…septic system field lines. However, it is for this reason that Petty’s will not connect any other drainage collection system upstream from a French drain designed to collect water. For example, connecting a downspout drainage system to a French drain surrounding the foundation is an easy way to guarantee water will enter your house.